With the release of iOS 10, jailbreak iOS 10 started questioning all over the web. But for the distracting fact, those who are upgraded to any iOS 10 version have still no rights to jailbreak iPhone/iPad/iPod Touch. In that way what can be the state of Jailbreak iOS 10.0.2 in days ahead? Will there be a chance to jailbreak iOS 10.0.3 or iOS 10.0.2 which Apple has recently stopped signing? Here are all fresh facts about jailbreak in the stand of Apple latest iOS 10. So have a look.

iOS 10.0.2 is the second minor update came over iOS 10 addressing some of the the related problems.  And soon with that iOS 10.0.3 too released to the general public exclusively in focus to iPhone 7/iPhone 7 Plus Cellular connectivity issue. In that way both these are two minor scale updates in focus to iOS slight fixes. And by now we find iOS 10.1 and also iOS 10.1.1 above iOS 10 with some of the feature changes and also with focus to fixes.

iOS 10 jailbreak started talking since the day it was viewed in public. And with every stage of iOS 10 update cycle, fans expected a change in the state of jailbreak too. In that way jailbreak iOS 10.0.2 is still a doubt for the fans those who started looking when times of iOS 10.0.2 released. but for the distracting fact we still find no way to jailbreak iOS 10 any version including iOS 10.0.2 jailbreak.

As to the usual theory Apple closes signing window for older firmware with the release of new versions. So with that Apple has recently closed signing for iOS 10.0.2 and iOS 10.0.3 making iOS 10.1 and iOS 10.1.1 are the only signing at the moment. In that way you have no rights to downgrade iOS 10.0.2 from your upgraded iOS by now. Even though you now do not get a heavy impact, this would be influential if Jailbreak iOS 10.0.2 get powered when times Apple has closed downgrade rights on iOS 10.0.2. In that way if iOS 10.02/iOS 10.0.3 jailbreak comes only a limited crowd would get jailbreak benefits. In case if the next jailbreak release is for the whole iOS 10 users in all iOS 10 version released so far it will be a massive update for the jailbreak community. So until things are confirmed let’s wait sitting on the version you are currently in work with.

When considering the previous cases, Jailbreak demonstrations have played a vital role. In fact they show the possibility for jailbreak with the contribution of trusted iOS hackers/researchers. In the side of iOS 10, we found about five demonstrations so far. But with the recent updates we now find two more that show iOS 10.1.1 jailbreak through a video and picture demo. 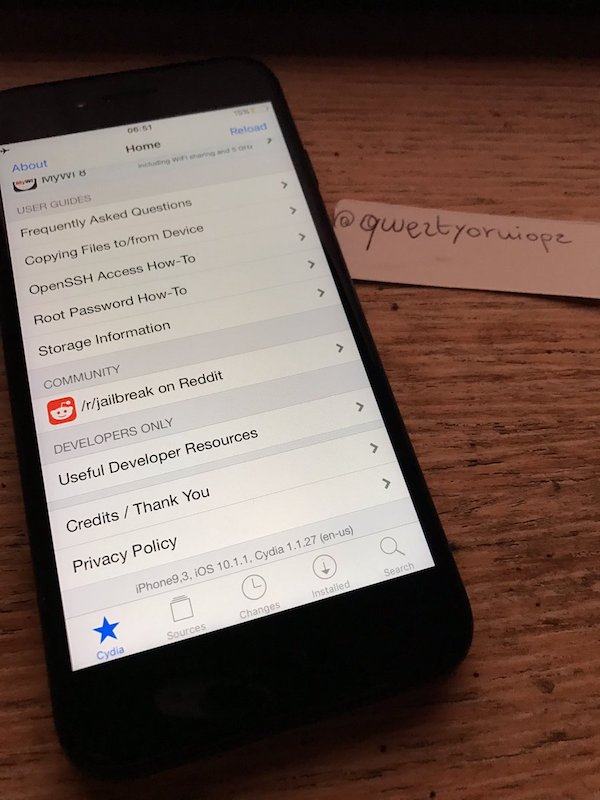 Developer @ijapija00 is the one who released a video showing iOS 10.1 jailbreak. And claims the same techniques and exploits are applicable in iOS 10.1.1 too. When he talks through a video, Luca Todesco got the next chance to say iOS 10.1.1 jailbreak is possible. Just like in previous iPhone 7 jailbreak, this time too he uses a picture in his twitter under the tagline “Updated my stuff so it works on 10.1 too now.”

With the exploits discovered so far iOS 10 jailbreak possibility is proven. Most interestingly iOS hackers have been clever enough to find new exploits throughout different iOS 10 stages. In that way iOS 10 jailbreak may drop in anytime build upon the way iOS hacking teams like Pangu and TaiG take the challenge. But in case if Jailbreak iOS 10.0.2 releases as the next jailbreak it would be worth for only a limited crowd. In fact Downgrading to iOS 10.0.2 or iOS 10.0.3 is now impossible with Apple’s recent updates.

Are you waiting for iOS 10 jailbreak? Share what you think in the comments below.