iOS has built multiple types of volume switching into it, but most commonly used are Media volume and ringer volume. Media volume is used to configure the volume of songs, videos, in game music, etc and ringer volume used to adjust the sound of text tones, ringing tones and notification tones. When you click the volume up and down button iOS changes your ringer volume. The media volume can only change with volume button when you are watching a video. SwitchHUD tweak lets you switch quickly between ringer and media volume with an activator action.

With SwitchHUD tweak you can instantly switch between the different volume modes and change volume levels accordingly. So you do not need to wait for video or song to be playing to adjust its volume. Download SwitchHUD new jailbreak tweak available in Cydia for free and supports iOS 9 devices. 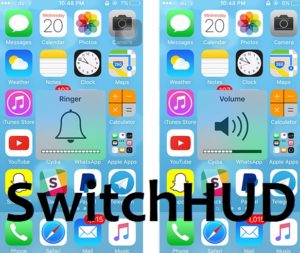 SwitchHUD tweak brings advantage of activator to let you to switch between the media and ringer volume modes. After download SwitchHUD tweak on your jailbroken iOS device, you do not have to open control center to adjust to change your iOS device’s media volume when  media is not playing. This tweak supports you get to a comfortable media volume with the volume buttons before the media starts to playing.

Usually, you should always need to open Control Center to adjust your media volume. Actually, it is hard to change the volume level with control center, because sometimes after watching a movie or listing a music as a high volume, we will forget to reduce the volume when it is finished. So the next time we go to use it, it will automatically be set to high volume and we will blow an eardrum out before we adjust its volume level. I think that new SwitchHUD app is a good option for this problem.

After installing SwtichHUD tweak in your jailbroken idevice, switchHUD adds a preference pane to your device’s Settings app. Go to Configuration > Toggle method to select the activator gesture that you wish to invoke to toggle between ringer and media volume modes. 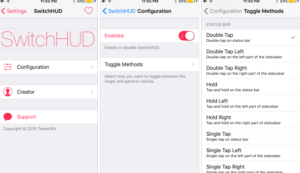 SwitchHUD tweak does not always work. It means, sometimes it will remain in ringer mode and never switch to the media volume. This is a serious issue of this tweak. However, if you need to have manual control over the iOS volume buttons, then this is the tweak for you.