If you are sick of this long wait for next jailbreak, what I brought today might sound quite interesting even though it caters only a certain iOS group. If you are on iOS 9.2.1 and looking for jailbreak, “Flying JB” by Chinese developers Min Zheng must be a great news as he has published a video in YouTube which demos iOS 9.2.1 jailbreak successfully with Flying JB. Therefore we thought of sharing all important facts about Flying JB for iOS 9.2.1 jailbreak as it has refreshed the iOS crowd with a new way of jailbreak. 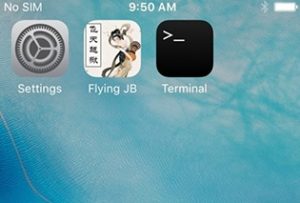 This is not the usual jailbreak we see from Pangu or TaiG, in fact it is not a GUI-based tool. So Jailbreaking with Flying JB would not be simple and easy. With the video Zheng uses an iPhone 5c running iOS 9.2.1 which access an unsigned Mobile Terminal app with a successful jailbreak which provides you the ability to run any command as root.

As once I mentioned this isn’t the jailbreak we familiar with Pangu or TaiG. In fact this Flying JB for iOS 9.2.1 jailbreak comes in an extremely limited frame. As to Zheng Flying JB is based on “inpuTbag”, a fifteen year old kernel HeapOverFlow vulnerability which is anyway patched in iOS 9.3.2 latest. In that way this jailbreak will not be a solution for iOS 9.3.2 jailbreak.

Limitations with the tool

This is not the ordinary jailbreak you see with Pangu jailbreak or TaiG, in fact Flying JB only supports 32-bit devices which means it could work on iPhone 5 and lower models. But that is not the only reason, in fact these iDevices must be running on iOS 9.2.1 or lower to work with Flying JB. If you are interested make sure about above two requirements and start Flying JB for iOS 9.2.1 jailbreak. But remember this jailbreak process lacks sandbox escape, which means Flying JB does not make you free of all security walls of Apple like what you gain with full functional jailbreak. And Zheng’s tool nothing revealed about Cydia install on iDevice after iOS 9.2.1 jailbreak rather than access grant to an unsigned Mobile Terminal app. So remember this comes with limitations even though it sounds quite interesting for the crowd.

If you still think Flying JB is a smart way to jailbreak your 32-support device running iOS 9.2.1 or lower, visit Github for source codes and more assistance from the developer.

Chinese Developer Min Zheng, who is better known as @SparkZheng holds the credit for this interesting jailbreak concept, and he has credited Cererdlong and Eakerqiu for the equal contribution in making Flying JB successful.

If you think you are adventurous enough to try Flying JB, make it run at your own risk, and do not forget to share your experience with us about Flying JB for iOS 9.2.1 jailbreak.